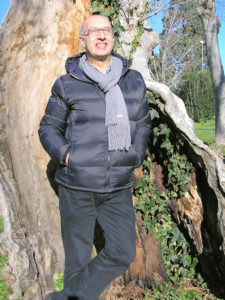 My training in artistic expressions has been developing in successive phases. The freehand drawing was congenial to me before I even learned to write the letters of the alphabet, so I always continued to practice it until the beginning of the lower secondary school, where I discovered the importance of colour.

In fact, in those years I dedicated myself to oil painting, which I practiced as a self-taught artist, and, later, thanks to contacts with my friend Leonardo Caboni, I was able to improve it through the suggestions given to me by professor Nino Cordio, teacher at the Liceo Artistico in via Ripetta in Rome.

This activity continued until the first year of University, where the study of architecture allowed me to know all the expressive potentialities of Drawing, both the artistic and the technical-geometric ones.

In this period I had the opportunity to attend an artistic foundry and have been able to follow the whole genesis of the realization of a bronze work, and this made me realize that sculpture was my true vocation, remained until then in nuce. In fact, in it I was able to condense all my previous expressions: the chiaroscuro drawing, obtained with graphite or with sanguine, which gave back to me the sense of spatial volume; the use of color, through the use of various surface patinas that allowed me to go from green to black, to the bitumen effect up to Florentine red.

This has encouraged me, alongside the activity of architect, to investigate other artistic expressions, such as engraving, etching and screen printing, as well as to experiment with the use of different plastic materials and, finally, to express myself in the field of design.